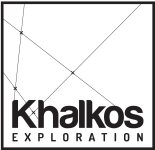 Results from the Annual and Special Meeting of Shareholders

MONTREAL, QUEBEC--(Marketwired - Aug. 24, 2016) - EXPLORATION KHALKOS. ("Khalkos") (TSX VENTURE:KAS) announces that all the resolutions that were presented at the annual and special meeting on August 23, were approved by the shareholders. These resolutions include the nomination of the directors and the auditors as well as the Stock Option Plan.

Shareholders elected Robert Gagnon, Jean-Paul Lacasse, Dominique Doucet, Roger Doucet and Nicolas Cantin to the Board of Directors. Moreover, during its board meeting, held after the meeting, Ms. Éliane Tremblay Paradis was elected as Secretary and Chief Financial Officer of the Company, Robert Gagnon as President, Chief Executive Officer and Dominique Doucet as Chairman of the Board. Jean-Paul Lacasse, Nicolas Cantin and Dominique Doucet will form the audit committee. Mr. Lacasse will serve as the president of the committee.

The Board of Directors has granted 1 150 000 stock options under its Stock Option Incentive Plan to directors, officers, consultants and employees at an exercise price of $0.16 per share. The options expire five (5) years from the date of grant.

Khalkos will benefit from the valuable geological expertise on Malartic and Bousquet mining camps from its new director, Roger Doucet. He participated in the past to several significant auriferous discoveries in these camps.